Concord, NC — More than 160 broadcast and digital news professionals gathered on Saturday, October 26th at Charlotte Motor Speedway for the 2019 convention of the Radio Television Digital News Association of the Carolinas.

Keynote speaker was Zackary Kiesch, a correspondent for ABC News, who told a personal story about his challenging journey into the broadcast news business. As for many broadcast veterans, his path to success was punctuated by challenges and setbacks. But focus and determination led to the opportunity to prove himself, eventually earning a place on network TV.

The convention featured a panel discussion on how to get the most out of your efforts on social media. The panelists were Molly Grantham, long time anchor and reporter for WBTV News in Charlotte and Trooper Bob Beres, traffic reporter for WCIV in Charleston and a 24 year veteran of the South Carolina Highway Patrol. Molly has more than 100 thousand followers on Facebook and talked about her years-long path to success. Trooper Bob not only uses social media effectively now as a television news professional, but also had viral success in law enforcement, distributing safety information.

This convention was a bitter-sweet, as the association marked the loss of two important board members. Haney Howell, was a professor at Winthrop University and an emeritus member of the board. Before education, he had a notable career in television and radio news at the network level. Ken White,  a television news director in many markets, including Charlotte NC, served the RTDNAC for many years and was particularly focused on student members and their advancement. The families of both men were presented with awards of appreciation. Ken’s wife, Jenny, and son, Mack, were on hand to accept the tribute and to present the “Student of the Year Award,” now named in White’s honor.

The highlight of the annual convention was the presentation of professional and student awards at the luncheon. Award winners can be found here. 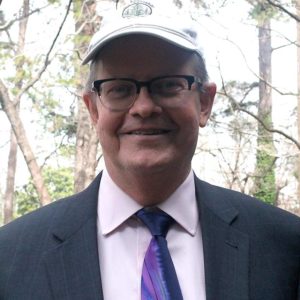 Ken White, an RTDNAC board member for two decades, died on Friday, October 11, 2019. He was 63. Ken was a journalist, working in Alabama, Tennessee, New York and West Virginia, and his home state of Pennsylvania. He was the founding news director of Fox Charlotte and had most recently been news director at WVVA in Bluefield, West Virginia. Ken was a past-president of RTDNAC and was named News Director of the Year in 2005.

As dedicated as Ken was to broadcast journalism, he was also a natural teacher. He worked closely with students in colleges in the region, including Winthrop, UNC-Chapel Hill, and Elon.  He was serving on the Elon University School of Communications Advisory Board at the time of his death. He had been on that board for more than 15 years. Ken gave many current journalists their start, through internships and by hiring them for their first jobs. He was always available to look at a student’s reel and to give career advice.

To his many friends, Ken was known as a “herder”, someone who kept people together. While others would text, Ken would call. During those calls, Ken’s passion for journalism, education, and sports, was always on display. According to his published obituary, “Ken coached multiple seasons of flag football at the Siskey YMCA, worked as an intern coordinator for the Charlotte Mecklenburg Schools Academic Intern Program, and was a board member for the National Sports Media Association. In recent years, Ken also volunteered at Providence High School where he worked with newspaper classes and high school’s student newspaper, the Providence Prowl.”

Ken met his wife, Jenny (Ferguson) White when they were both working for WPXI in Pittsburgh. She survives him along with his son, Mack, and daughter, Madeline.

Here’s what some RTDNAC members had to say about Ken:

“Ken ran a very friendly, warm, and open newsroom. He’s the only news director I’ve ever worked for who regularly took the entire crew out for breakfast. He really facilitated a family environment in his newsroom. I look back and realize what a special thing that was. Ken always had a smile on his face. He knew how to balance being a friend and the top boss, and we all know that’s no easy balance.

I was always so impressed with the fact that Ken would regularly show up to work at the crack of dawn in order to catch the morning show and be present for the morning team. I remember thinking: he doesn’t have to do this. He wants to do it. One morning he asked me how I was doing. I jokingly said I could use some breakfast. The next morning he showed up with a Bojangles spread for the whole morning show staff. This was not out of character for Ken.

We only worked together for one year, but Ken and I would regularly see each other at Elon and RTDNAC events in the years to follow. Even though I was no longer his employee, his kindness and warmth never wavered. We last saw each other at a RTDNAC conference– must have been around 2013. I remember giving him a hug and chatting for a bit before he went off to mentor the visiting college students. In my circle of journalism friends, that’s what Ken is known for. “

“Ken White is the reason many of us are on the board today – he was a man who loved to connect people and saw the big picture. He cared about those he worked with, he loved the industry and he made those around him better. Ken had a true heart for RTDNAC and its mission. He was committed to our organization and he loved seeing it grow year after year. Mostly, he was a constant that will be very missed. His jokes, smile and sense of humor make life just a little more fun. His years of experience and love for sharing it with students was unsurpassed.  Ken’s passing is truly a loss for our board that will never be replaced. “

“Ken showed us how to face adversity with an incredible attitude and amazing courage. His zest for life in his fight against cancer became an inspiration. He also impacted so many people through mentoring, coaching, teaching, supporting, and counseling. His legacy will live on through their collective work and public service. Ken was remarkable, and we’ll truly miss him.”

“I first got to know Ken in the Nineties when he was at WXII-TV in Winston-Salem.  Ken never failed to make me smile, or laugh out loud, with his quick, sharp wit. When my boss, Andy Still, was retiring in 2007, Ken reached out to me about taking Andy’s position on the RTDNAC board. How many of us who have joined the board over the past couple of decades have gotten that call from Ken, gently cajoling us to considering serving? Ken, we will miss your passion, your leadership, your love for RTDNAC and the future of our business. Thanks for being a great friend.”